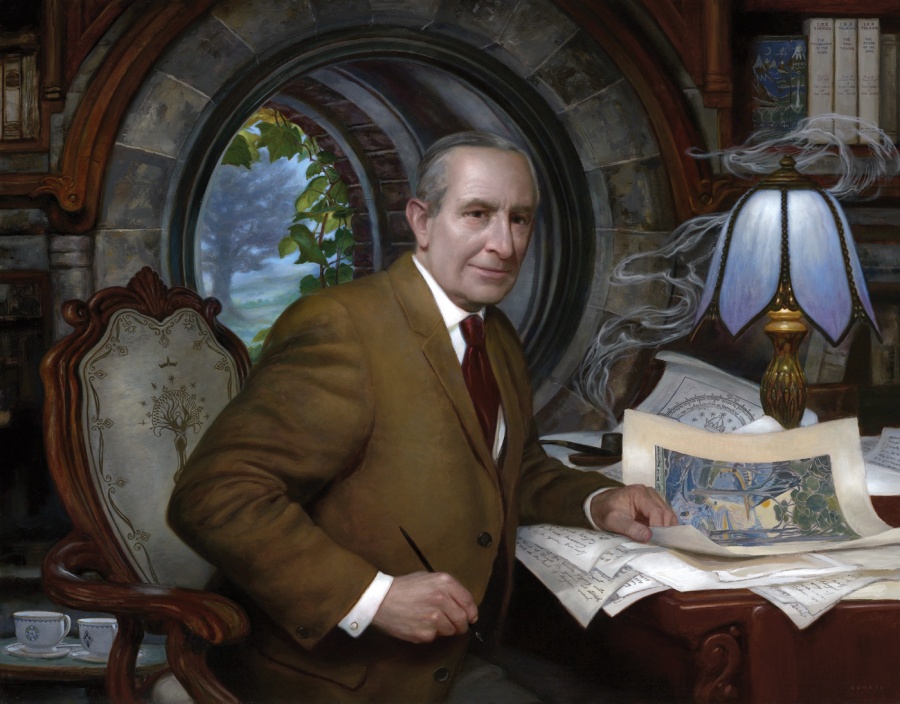 This is one in a series of posts where the content is provided by a guest who has graciously answered five questions about their experience as a Tolkien fan.

To see the idea behind this project, or if you are interested in sharing your own, visit the project homepage. If you enjoy this series, please consider helping us fund the project using the support page.

I want to thank Donato Giancola for allowing me to use his artwork for this project. Prints are available on his website!

Now, on to Chris Stevens’s responses:

It’s strange, I can remember almost exactly when a friend of mine recommended it. It’s a fairly vivid memory considering how long ago it was (1973). It was in Spanish class when I was a junior in high school (16 yrs old). I don’t think I’d read anything like it before. I typically read science fiction, mysteries, spy novels, although I did like stories of knights. I think I had read Ivanhoe not long before this. I started The Lord of the Rings but when I was partway through the prologue, I discovered there was an earlier book. As I like reading things in order, I went back to the bookstore to buy The Hobbit. I probably read the whole series 3-4 times per year through college. Although I don’t read them as frequently now, they are like old friends when I sit down to read them. Needless to say, they have made an impression on me.

Difficult question: The Fellowship is probably my favorite individual volume. However, I love The Silmarillion. A couple years before it came out, I had read something about this other book that Tolkien wrote, and I couldn’t find anything else about it. (no Wikipedia in those “elder days”) Therefore, I wrote to Houghton Mifflin for more information. They kindly responded telling me that his son was preparing it for publication, and it would be out in a couple of years. With all the anticipation, I bought it immediately when it appeared in a book club list. I was blown away.

In 2010 I stumbled on Corey Olsen’s Tolkien Professor recordings of his Tolkien class. I continued to follow his podcast and was honored to participate in his Silmarillion Seminar. The seminar met weekly for most of 2011 and I learned so much that I never previously considered, and it was great fun. Several of us attended Mythcon in Albuquerque that summer. It was so much fun meeting the “Silmarillionaires” face to face.

Very much so. Before I discovered Professor Olsen’s podcasts, I had read The Hobbit, The Silmarillion and the “Trilogy” * countless times. However, in retrospect my readings were quite superficial. Participating in the Silm. Seminar really opened my eyes to the depths of his work.

*(Don’t shoot me: I know it’s not a trilogy but that’s what everyone called it when I first started reading it. LOL)

Absolutely. I definitely recommend The Lord of the Rings and The Hobbit. They are great stories and Tolkien’s prose is first rate. They hold up for many, many readings. I get something out of them every time I read them even now.

As much as I love The Silmarillion, I only recommend it with a caution. You have to know what you’re getting into. If you are expecting something like the other published works, you will be disappointed. You also can’t expect to just read it once and “get it”. There is just too much there. I know I’m biased but reading through it along with the Silmarillion Seminar podcast, is a great way to get into it. I think Unfinished Tales should be read along with The Silmarillion.

The Histories should probably only be approached if you are REALLY, REALLY interested in the stories’ development. I have read a lot of the Histories but sometimes they can be difficult.  Volume 10 and 11 on the “later Silmarillion”  are my favorites.  I’ve yet to read volume 12,  The Peoples of Middle-earth.