On the journey between Bree and Rivendell, Strider’s character becomes more complex, especially when the group arrives at Weathertop. The first suggestion that Strider is more than a roaming do-gooder is the fact that he has earned Gandalf’s respect. According to Gandalf’s letter, and Strider’s subsequent ruminations on how Gandalf would likely proceed, we understand that the two of them have often worked together and that they understand one another well. Just before they reach Weathertop, however, Strider’s learning is on full display. It is here that the ranger of the north divulges his knowledge of history. He answers the hobbits’ questions about Weathertop by sharing his historical knowledge of the area, then he relates some of the tale of Gil-galad.

To the surprise of all, Sam goes on to recite a bit of Gil-galad’s tale! This was a marvelous occurrence to me, as I did not expect it from Sam at all. He was listening to Bilbo closer than I ever gave him credit for! Unfortunately, Sam’s knowledge does not extend past this excerpt and he is unaware of its significance. Later, the hobbits request that Strider tell them the full story and he declines, saying that now is not the time. Instead,

Then follows a lengthy poem that recounts the story of the meeting of Beren and Lúthien.

This poem is significant for several reasons. First, it allows for exposition of Aragorn’s character and of the history of Middle-earth. This incident shows Aragorn to be knowledgeable of the lore of men and elves. Additionally, this sharing of lore seems to have the side-effect of forestalling the encounter with the Black Riders. They seem to lurk in the shadows until the tale is told and silence falls again. Finally, Corey Olsen posits that this is the moment in the drafting process where Tolkien decides to have LotR and The Silmarillion (not italicize because here it refers to the entire legendarium and not the published text) inhabit the same imaginative world. While this may be the case, when I first read the text, all I garnered from this episode is that Strider has much more wisdom than simply the skills of a tracker and forester. This sense is underlined after the events on Weathertop when Strider reveals that he has been to, and in fact lived in Rivendell for a time.

On Weathertop we see Strider’s real fighting skills for the first time. Contrary to how the movie adaptation depicts the scene, Strider does not use a sword in his combat against the Riders. Instead he uses fire brands to hold them off. This was significant to me in a couple of ways. First, it demonstrates that he is a formidable warrior in that he can adapt and use different weaponry when the situation dictates. Also, the imagery of Aragorn wielding the fire, a source of light, against the dark, shadowy Riders was symbolically important to me as a young reader.

The final insight I wanted to discuss about Strider is his use of Athelas on Frodo’s wound before Glorfindel arrives. This episode underscores Strider’s learning again, but it is not strange that a forester would have a bit of herb lore. The scene, however, demonstrates more about Strider than just his knowledge base. It demonstrates his emotional investment in the hobbits. Strider seems to genuinely care for the hobbits and he wants to ease Frodo’s suffering and delay the poison of the blade as much as he can. This care becomes more evident as this leg of the journey continues and he becomes increasingly worried about Frodo.

Where Do We Go From Here?

Glorfindel and the elves (pre-Rivendell) are next! Then we will cross the Ford and enter Rivendell.

What Do You Think?

What Aspects of Strider’s initial characterization change for you in this section? When?
​Did you picture Aragorn with a sword on Weathertop or not?

You can probably anticipate what my initial approach to Strider was. As with almost everything in the story, I was untrusting or even outright skeptical about him at first. Who was this shadowed figure trying to wheedle himself into the confidence of the hobbits? Unlike previous encounters where I held on to my preconceived notions longer than other readers might or where, however, I imagine that I changed my opinion around the same time as most other readers. I decided to trust Strider the same time that the hobbits did: after they see Gandalf’s letter and he proves that he is Aragorn by showing his broken blade.

I think part of the reason that I decided to like Strider is because the rest of the Breelanders did not like him. Frodo claims that

“You have frightened me several times tonight, but never in the way the servants of the Enemy would, or so I imagine. I think one of his spies would – well, seem fairer and feel fouler, if you understand.” 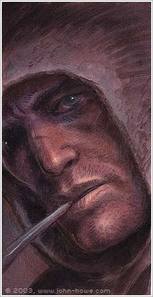 I think that this passage helps to explain my own approach. Throughout the early parts of LotR, I had an innate mistrust of any characters that seemed fair, because their aspect is unbelievable (the elves are excluded from this, but we will talk more about that as we enter Rivendell). Therefore, my approach to this unknown world of Middle-earth was similar to Frodo’s own. I had reservations, often verging on misgivings, about people who seemed to be better than they were. Hobbits I innately trusted because they were familiar; for example, even though Maggot is daunting, he was still a hobbit, and so was not a source of fear so much as tension or conflict. Once the hobbits leave the Shire, however, most of their encounters were cause for alarm to me because each was an encounter with the unknown.

Strider is the exception to this rule so far. He mirrors the trajectory of Maggot in that he seems gruff and unlikable, but eventually grows into an ally for the hobbits. This is the first character that the hobbits meet outside the Shire who is not as he appears. The foreboding caused by Old Man Willow and the fear of the Barrow wights were appropriate responses and Bombadil really was a merry, if frighteningly powerful, fellow (even though I had my doubts). For the first time, a character who is not a hobbit presents some real complexity of character and does not fit in to his surroundings. This makes him intriguing to the reader and we want to know more about him. In fact, we, like Frodo, want all of our questions answered on the spot there in Bree. It is the artistry of Tolkien, however, to prolong the mystery and only unravel Aragorn’s true significance bit by bit.

I will go a bit more into Aragorn’s lore and medicinal skills in my next post, as we approach and then descend Weathertop, but I did want to say a bit more about his character on the road, as it were, with the hobbits. I came to like Strider very quickly because he is direct in his guidance, but does not take himself so seriously that he does not have fun while with the hobbits. I think Jackson’s characterization of Aragorn strays quite a bit here. The hobbits are the characters that readers are supposed to identify with, that is why the tale is told from their vantage point. This elevates Aragorn to be above the station of the reader. The reader does not like Aragorn as an equal, but appreciates the burden of his responsibility and his condescension in being a ranger and protecting the hobbits. This makes his character much more complex and interesting. Aragorn is not the character whose history we can understand or whose purpose we can see ourselves mirrored in, but the fact that he is willing to come alongside the hobbits and help them in their quest demonstrates a quality of character well beyond what is expected of individuals with power and station.

Where Do We Go From Here?

Next stop: Weathertop. Then I want to pause and talk about Glorfindel and elves before we head into Rivendell

What Do You Think?

What was your first impression of Strider?
Do you relate more to the hobbits or the men depicted in LotR​? Why?

We have finally arrived at Bree! As the first non-Shire settlement, there is much for the hobbits to adapt to and many new avenues of experience for them. Perhaps the plethora of innovations that the hobbits experience impacts the way that this scene can be interpreted in different ways.

In his Exploring the Lord of the Rings podcast, Dr. Corey Olsen suggested that Peter Jackson did not accurately portray the Prancing Pony in his film. According to Olsen, the great peril of the Pony is that it was so warm and inviting that it would put the hobbits off their guard, which could trick them into revealing more about their errand than they should. He denounced Jackson’s interpretation as far too scary and dark.

Personally, my own experience echoes Jackson’s interpretation more than Olsen’s, although I do see parts of the hobbits’ experience at the Pony as pleasant. While I can appreciate Olsen’s perspective, I always saw the common room at the Pony as in intimidating place because it is the first time that the hobbits encounter the Big People, if you will. Reading the scene as child, it resembled my own experience of entering a room of adults. The feelings of uncertainty and unease that occur to anyone who enters a room where they can assume that they are the least knowledgeable about the world and other people. This connection is obviously an extension of my reading of the hobbits as children.

While the common room unsettled me, I understood that the hobbits were at ease for part of their time there and relaxed for most of their time before going to the common room. Perhaps a more accurate assessment of my response would be that I thought the Pony was, to paraphrase Aragorn, both fair and perilous. The warmth of the caretaker and his staff were more than enough to allow any weary travelers to rest and be at peace. The inclusion of hobbit rooms at the Pony was certainly an unlooked-for balm for the hobbits as they relaxed from their travels. Once the hobbits are refreshed, they confront the world of the Bog People without being properly prepared. While the hobbits felt ease in the beginning of their encounter in the common room, it quickly became a source of intimidation and fear. Just as Frodo was aware of the danger before his fellow hobbits, so I, as the reader, was aware of the danger upon entering the common room.

This is partly because of the warnings that Merry and Pippin bandy back and forth before going to the common room. In Olsen’s opinion, most of these warnings are friendly ribbing among the hobbits. As a young reader, though I took them all very seriously. This put me on guard as they entered the common room, and Frodo’s misgivings only acted as a confirmation of my presuppositions. I do not think that the disagreement in interpretation here changes much of the characterization of important people moving forward. Therefore, it seems to me that this episode supports either of these two interpretations because later developments do not necessitate one interpretation over the other.

Where Do we Go From Here?

I would like to take a post to reflect on Aragorn-as-Strider and then probably move on to Weathertop and the lore that breaks in there.

What do you think?