A few years ago, my wife and I began a fun tradition that we reenact every year during the holiday season: we read through Letters From Father Christmas by J.R.R.Tolkien!

We don’t just sit down and read the whole book cover-to-cover. Instead, we take turns reading a letter or two each day, spreading the fun of the event over a few weeks!

If you want as many letters as possible, you want to make sure to get a copy of the revised edition. Almost any book published after 2004 will have this added material. If you want a more interactive experience, though, you can’t beat the 1995 version, with removable letters!

The newer version is the easiest to find, it is even available on Amazon.

(If you have to have your cake and eat it too, like me, you get both editions so you can have the pull-out letters, but still read all the ones left out of the earlier version!)

I now have the Deluxe Edition published by HarperCollins and am looking forward to using it this year! I will probably use it in conjunction with the 1995 version. (I will be updating the reading plan with the Deluxe edition letters in December of this year, and i will note the edits when they are inserted.)

Why do we love reading this little book each year? To be honest, it is just plain fun! The character of The Great Polar Bear is hilarious and it is fun to see the little arguments that he and Father Christmas get up to! It is also fascinating to think about what is going on in the lives of the Tolkien family and in the larger world year by year and wonder how much that influenced the letters! So there are several levels that keep us coming back!

I thought it might be fun to give an example of our typical reading schedule in case anyone else wants to give it a go! I also include a few thoughts/comments mixed in!

–In these letters it is plain to see that there is no real story developed, just a fun activity of father writing to child.

–This is where the fun really begins. The introduction of the Polar Bear adds conflict and drama to the story, allowing plot to develop in subsequent letters!

–In this letter and the next the character of the Snow Man is introduced but nothing much comes of him. The letters are in dark envelopes with white writing. Did the story come before the envelopes, or was it an attempt to explain the envelopes Tolkien used?

–This letter and the next are a couple of my favorite letters! The Polar Bear is at his clumsy best, and the wordplay in the 1928 letter is delightful!

–The images fro this letter have an almost comic book quality in their storytelling ability!

–This year has multiple letters and shows Tolkien at his best! The letters start in October and employ many fonts and voices! The art is exquisite with one of my favorite illustrations of Father Christmas and a marvelous mountainscape!

–One of the longest letters comes this year! It details the harrowing adventure to find Polar Bear and also gives a copy of cave drawings by men and goblins! 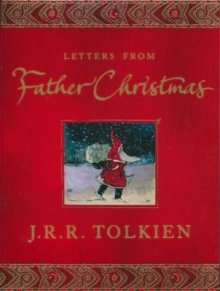 –This year there is a large fight with the Goblins, and the art features one of the most iconic images of the Polar Bear!

–A shorter letter, but a stunning drawing of a tree all decorated for the holidays!

–The length picks up again, and there is more detail on the other bears, a favorite topic around our house.

–This letter employs the device of an elf scribe because Father Christmas and Polar Bear are too busy to write. This voice is very different from the others! Interestingly, a goblin alphabet is also included in this year’s letter!

–This is one of the most stylistically complex letters of the bunch. The voices of the elf scribe and Polar Bear argue back and forth throughout he letter, making for delightful banter!

–There are no flashy pictures in this letter (which is mentioned specifically), but we see Father Christmas try his hand at some poetry. Also included is some unflattering commentary by Polar Bear!

— These years have some very short letters, but each has a remarkable picture. Enjoy!

–A longer letter than the previous years, it shows influence of war and conflict. There are some melancholy tones among the cheerfulness shown here. Is it all about the war, or is it also a note of a father who realizes that his youngest child is growing up?

–Priscilla didn’t send a letter this year. Father Christmas sends his last long letter giving updates about the goings on in his area and hoping the best for the Tolkien family.

— The final letter is a short farewell letter. Melancholy but sweet.

I hope you enjoy the book as much as we have! It is a great way to spend a few minutes each day getting into the holiday spirit! 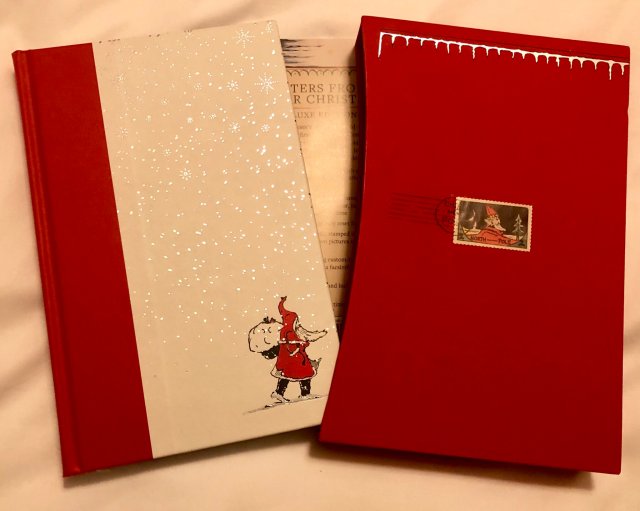